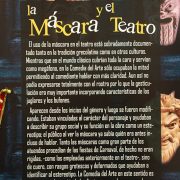 “The Carnival on stage, types of comedy of art”, will remain open at CERE until March 18

Friday, January 26 at 8:30 p.m. at the CERE, the mayor of the Miguelturra Victoria Sobrino, inaugurated the exhibition “The Carnival on stage, types of the comedy of art”, accompanied by Francisco Javier Navarro Haro, Director of Education Province of the Board of Communities of Castilla-La Mancha, Luis Alberto Lara Contreras, Provincial Deputy of the Provincial Council of Ciudad Real, Diego Rodríguez, Councilman of Celebrations of the Municipality of Miguelturra, Nuria Sánchez, Churriega Exemplary 2017, Jorge Jiménez, curator of the exhibition and sheltered by a very large audience that filled the Sala, the mayor thanked the celebration of these events that help achieve a common goal: the declaration of Migueltura Carnival as a Festival of National Tourist Interest.

Jorge Jiménez, commissar of the exhibition, began his speech with a plea regarding the worth of MOMO. Interpretation Center of the Carnival as a very competitive cultural product and service. He remembered when the space was designed, -project in which he participated-, he did it in a very ambitious way trying to be a reference. To do so, a large number of transversal development lines were included to keep MOMO alive, one of which is the temporary exhibition hall that was full of life yesterday.

The exhibition mixes carnival with the world of theater and addresses how in the Italian Renaissance a new theatrical genre emerges while the first companies are professionalized, this is what is known as “Comedy of art”. This is not born from nothing, but arises from a rich folk tradition that floods the public square, in it we find everything from mountebanks to farces, from jesters to blind storytellers, and of course, the thousand and one manifestations of the carnival.

The carnival was introduced in this theatrical genre that lasted more than three centuries and that traveled throughout Europe and the rest of the known world with its characteristic characters on the stage. These were stereotypes, they acted with masks and always played the same role. They were divided into three: the servants, the old and the lovers. Among them the most famous are Pantaleón, Harlequin, Pierrot… names that sound to us all because they are in our culture deeply rooted. When the genre ran out and died, the common people did not let these characters disappear and kept them alive in that carnival they had been born, so we are talking about a round-trip relationship.

The exhibition consists of more than sixty pieces including prints, costumes, books, toys and a mural of contemporary art made expressly for the same by the artist Roberto Carretero “Gobi”.

This piece, will do especially the delights of the most local public, since in it the artist tackles something as Miguelturra as is the Ermita del Cristo and the street mask. It also includes three scenographies to tell us what the scenarios of the Comedy of Art, the world of the mask and the ballet were, together with two audiovisual resources of support. With it the viewer will be able to see the complete series of illustrations of the Frenchman Maurice Sand, of which, was already used for the realization of some of the MOMO rooms.

Jorge Jiménez closed the ceremony, remembering the words of Victoria Sobrino in FITUR, when she said that Miguelturra was called to be the tourist door of the Campo de Calatrava, something in which the curator said to agree, taking into account that for that door MOMO It’s the key.