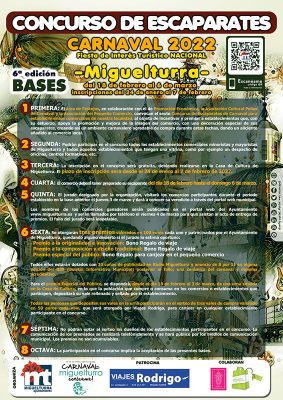 The VI Edition of the Miguelturra Carnival Shop Window Contest 2022 is underway.

A contest whose main objective is to encourage and reward businesses that support and improve the image of the carnival, creating a pleasant shopping carnival atmosphere during the ten days that the Carnival party lasts.

All retail and wholesale commercial establishments in Miguelturra can participate, as in previous years, provided they have a display case or window with views of the street.

Those present have encouraged the merchants of Miguelturra to participate in the contest, in addition to being one of the few activities that were held during last year’s carnival.

I Tapas Route “Get to know me, flavors of Carnival”
Scroll to top