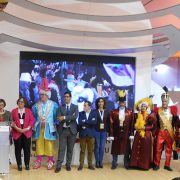 The mayor of Miguelturra, Victoria Sobrino, has been accompanied by the President of the Provincial Council of Ciudad Real, José Manuel Caballero, the delegate of the Board of Castilla-La Mancha, Carmen Teresa Olmedo, the president of the Association for the Development of Campo de Calatrava, Miguel Angel Valverde, celebrations councilor, Diego Rodríguez, councilor of culture, Fátima Mondéjar, King of Carnival, Serafín Delgado, Major Masks of 2018, Orestes and Mª del Carmen, Major Masks of 2017, José and Antonia, President of the Carnival Association of Miguelturra, Raúl Domínguez, as well as some other street mask, most representative figure of Miguelturra Carnival.

Sobrino, has presented the poster of Carnival 2018, to later expose, why the Carnival of Miguelturra should be declared of National Tourist Interest, remembering that in 1983 it was declared of Regional Tourist Interest by the Board of Communities of Castilla-La Mancha. He has toured the benefits of the party, its uniqueness and the originality of its characters, its tradition, the street mask that is the hallmark of the party and that has lasted through time, even in the era of prohibitions, by the Popular, spontaneous and participatory character of a whole town, for its gastronomy and finally for its museum, a unique museum in Spain that covers the history of the carnival of the whole world, but especially that of Miguelturra. It has also indicated that Miguelturra is perfectly communicated and that the town and its region have enough infrastructures and accommodation to accommodate tourists who want to know the Miguelturra

Nephew, has finished his speech with a ¡¡Live the Miguelturra Carnival!!

Inaugurated the exhibition The Carnival to Scene
Scroll to top