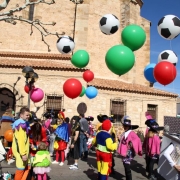 The Peña el Jamón, has traveled the streets of the town with Diana Carnavalera, as it has been doing for many years.

In the Plaza de España, the Peña Maltrataos has distributed an excellent chocolate accompanied by sweets and a shot of anise for those who wanted it, by noon has prepared an exquisite food from La Mancha. The company Repostería Codan has been the collaborator of this event.

While in the Plaza de la Constitución, starting at 11:30 h. and organized by the Peña el Bufón, the ‘chick’ was concentrated to participate in the Children’s Carnival, accompanied by mothers, fathers and relatives who did not want to miss the event. Afterwards, he went to the Carnival Palace, where a great children’s show “Juggling” awaited them. The act has had the collaboration of Civil Protection.

At noon, in Doctor Fleming Park, the Peñas Los Cansaliebres, Los Rocheros, Kapikua y Alhigui, have prepared some delicious crumbs, distributed ham, meat with tomato and potatoes with meat, to regain strength in this intense Sunday of Carnival.

The afternoon has started with the Masked Volleyball, starting at 4:30 p.m. and in front of the CERE this peculiar championship has been organized by ADV Miguelturra and the Peña el Bufón. The prizes have been the following:

A great Sunday of carnival accompanied by an incredible temperature for these dates that has caused the Doctor Fleming Park to be crowded with people.

A Monday of disguise and gastronomy
Scroll to top