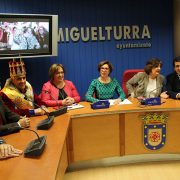 The long-awaited announcement, has taken place around 20:00 h. in the Plenary Hall of the Town Hall of Miguelturra, which was attended by the Mayor, Victoria Sobrino, Minister of Economy, Business and Employment, Patricia Franco, President of the Provincial Council, José Manuel Caballero, delegate of the Board in Ciudad Real, Carmen Teresa Olmedo, Provincial Director of Economy, Business and Employment, Agustín Espinosa, Provincial Director of Education, Francisco Navarro, Vice President of the Provincial Council, David Triguero, Councilman of Celebrations, Diego Rodríguez, Councilor for Culture, Fátima Mondéjar, Councilors of the City Council of Miguelturra, Aurora López and Miguel Angel García, King of Carnival, Serafín Delgado, President of the Carnival Association of Miguelturra, Raúl Domínguez, Masks of 2017, José Cañizares and Antonia Nieto, Masks of 2018, Orestes Corral and Mª del Carmen León.

Both Victoria Sobrino, Patricia Franco and José Manuel Caballero, have shown their great satisfaction at the time of making the announcement, the work of several years both from the City Council itself, as the Provincial Council and the Board of Communities of Castilla-La Mancha, has paid off with the long-awaited declaration of the Carnival of Miguelturra as a Festival of Regional Tourist Interest.

The Carnival of Miguelturra, is a different carnival, it is a popular and traditional carnival, that not even the prohibitions have prevented its celebration, a carnival whose main protagonist is the Street Mask and above all, a carnival whose history is lost in time, transmitted verbally from generation to generation.

From the City Council, Sobrino has indicated, will work on the adaptation, management and exploitation of the CERE and the Carnival Museum, a unique museum in Spain, making it a tourist attraction for the city and within the strategic plan of tourism of Campo de Calatrava. He also indicated that work will be done on the creation of an international association of carnival cities, whose charter will have Miguelturra as the founding place and the creation of the open shopping center of Miguelturra, as a link between the capital and the Campo de Calatrava.

José Manuel Caballero, also wanted to highlight the support for the party by the Provincial Council of Ciudad Real, with publicity campaigns at the national level, as has been done with other festivals of towns in the province also declared of national tourist interest and promote visits to the Carnival Museum from collectives and schools in the province.

To end the turn of interventions, Patricia Franco, has indicated that from the regional government Miguelturra Carnival will also have an ally for the promotion and expansion of the festival, thanking the Ministry of Tourism for the recognition of the Carnival of Miguelturra as a tourist interest national and encouraging everyone to work 365 days a year for the Carnival.