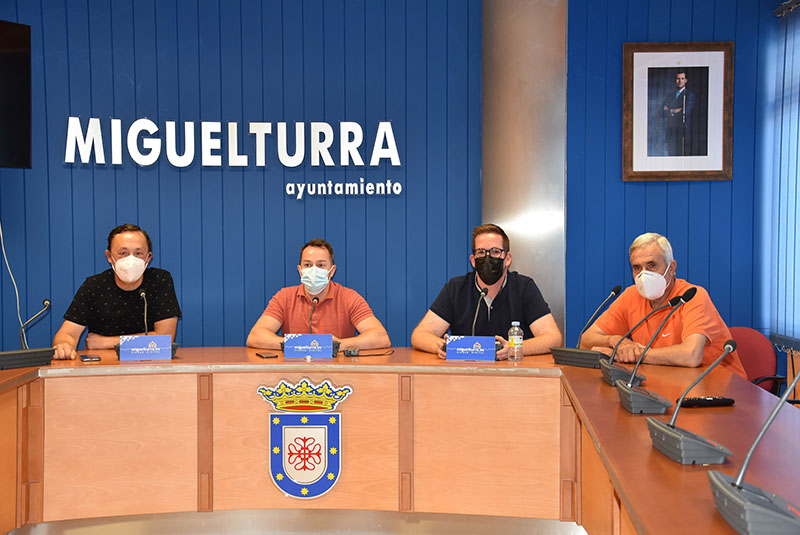 Thanks to the agreement signed between Diario Lanza and the Asociación carnavaldemiguelturra.es

The councilor for Celebrations, Diego Rodriguez, accompanied by the president of the Carnival Peñas Association, Raúl Domínguez, the carnival king, Serafín Delgado, and the president of the Miguelturra Carnival Historical Cultural Association: carnavaldemiguelturra.es, Berna Martínez, has presented a new project focused on the dissemination of carnival and the promotion of the brand ‘Carnival, Know Me’, thanks to an agreement carried out between Diario Lanza and the aforementioned association.

Rodriguez has reported that the signed agreement consists of the transfer of the historical archive of Lanza of all the photographs referring to the Miguelturra carnival to carnavaldemiguelturra.es “so that we continue to promote, above all, our big festival, declared of National Tourist Interest since 8 February 2018”. In this sense, the mayor has indicated that “this is a project in which we will be working little by little throughout this year and whose objective is to continue promoting our party, despite the health situation that we are going through, and after not to have been able to celebrate the long-awaited and beloved carnival of 2021, which does not mean -adds the councilor- that we have stopped working for a moment in our most popular festival but from another perspective”.

Diego Rodriguez has also announced that “this project joins other works in which we are embarked and that will help to spread, if possible even more, the photographic archive that Lanza has given, to continue to publicize our carnival at a regional and national level”. Specifically, the mayor has highlighted a project together with the Carnival Peñas Association on the occasion of the 40th anniversary of its foundation and the reissue of a book on the history and tradition of the Miguelturra carnival that will see the light of day in the near future.

Finally, the Councilor for Celebrations has publicly thanked the work that the Association of Peñas and the Carnival King are doing throughout the pandemic, “in order to reinvent themselves to continue promoting our great party”, as well as thanks to Launches the carnivaldemiguelturra.es association.

For their part, both the president of the Carnival Peñas Association, Raúl Domínguez, and the carnival king, Serafín Delgado, have shown great gratitude to all parties that are working on this project “to continue enhancing the most emblematic festival de Miguelturra “according to Domínguez, who has also recognized” the work of many anonymous people with the contribution of historical documents of the carnival”. Delgado added that “you have to support the carnival as much as possible” and wished “that next year we are lucky and we can celebrate something of our party”.

Finally, the president of carnavaldemiguelturra.es, Berna Martínez, has especially thanked the collaboration of the vice president of the Provincial Council and delegate president of the Public Business Entity of the newspaper Lanza, Noelia Serrano, as well as the director of the newspaper Lanza, Conchi Sánchez , “because it has made it possible for us to have this great documentary collection” that consists of around 3,500 high-quality photographs taken by professional photographers. Martínez has reported that the entire archive corresponds to images of the 21st century “which is a great boost for the existing documentary collection.”

The president of the association has indicated that “with this project we intend to start a series of written and digital publications that will promote the 40th anniversary of the Carnival Peñas Association and, later, the edition of a book on the occasion of the 5th anniversary of the declaration of National Tourist Interest”. For this reason, Berna Martínez stressed that “all this fund will help us to promote these books, in addition to the website or publications on the anniversaries of the clubs. But above all it will serve to promote our carnival” has ended.