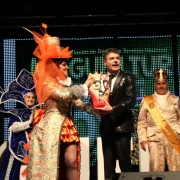 The actor Nacho Guerreros, better known as ‘Coque’ in the television series ‘La que se avecina’ has given the starting signal to the Carnival of Miguelturra 2019, which for the first time are of National Tourist Interest.

The Peña Los Segadores with its charanga, as is customary in our carnival, took charge of the organization of the event and from eight o’clock in the afternoon, local, provincial and regional authorities, together with members of the Association of Peñas, Rey of the Carnival, Peñas de la localidad and Máscaras Mayores, gathered at the gates of the Town Hall in the Plaza de España to receive Nacho Guerreros.

After the reception, the delegation went to the CERE and visited the Carnival Museum ‘MOMO’. At 9:30 p.m. the long-awaited proclamation began, with a Palace of Carnival overflowing. First, I take the floor the mayor of the town, Victoria Sobrino, thanked the presence of Nacho as a crier of the Carnival of Miguelturra and invited everyone to enjoy this wonderful party, which in Miguelturra will be for the first time of Tourist Interest National.

Once the intervention of the mayor, Nacho climbed the stage of the Palace of Carnival and began the proclamation with a tour of the history of our carnival, a carnival whose history has been passed down from generation to generation and whose first written document dates from 1898 , this document can be consulted in the History section of this website.

Nacho acknowledged being excited to be the first crier with the declaration of National Tourist Interest and made a tour of the various acts that are celebrated in our carnival, burial of the sardine, friying pan fruit, parade on Sunday Piñata…

Between applause and cheers of the Peñas, Nacho was mentioning one by one the carnival Peñas of the town, not missing phrases typical of his fictional character ‘Coque’.

Once the proclamation ended, the delegation went to the silk of the Peña los Segadores and during the tour Nacho kindly attended to the people who came to be photographed with the.

Thank you very much Nacho for to come great Carnival 2019.