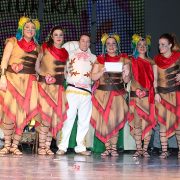 Once the Carnival Museum Costumes competition was over, the XXXIV edition of the Murgas and Chirigotas contest of the Miguelturra Carnival began.

The chirigota El Culo de la Manola of Damiel and its subject “Los Tarugos”, obtained the third prize, endowed with 400 euros. In this case, the work of the carpenters was the theme chosen by this chirigota.

n fourth prize of 250 euros, it was for the chirigota of Alcázar de San Juan, Pa mear y no echar gota, the babies and the parents’ worries, it was the chosen topic.