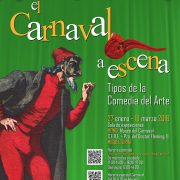 It will remain open from January 26 to March 18 in the Carnival Museum ‘MOMO’, located in the CERE

It has been presented in the Plenary Hall by the Councilman of Celebrations, Diego Rodríguez, by the Councilor for Culture, Fátima Mondejar, and by the Commissioner of the Exhibition, Jorge Jimenez. The exhibition is organized by the Celebration area, in collaboration with the Culture area.

The inauguration will take place on January 26 at 8:30 pm, and will be on display until March 18, at the estimated time shown on the posters. There will be guided tours and activities for all audiences.

“We encourage participation” and we invite all groups of Miguelturra and other localities to come and visit both the exhibition and the museum, so they can learn more about our carnival.

For more information, you can call the Culture House of Miguelturra. Rodríguez, has finished his speech thanking from the celebrations area to all parties involved and trusting that it is to the liking of the public.

The mayor of culture thanked those present for the organization of the exhibition, which will spread the Carnival Museum. As you know Miguelturra has one of the few museums dedicated to Carnival throughout the national territory and unique in Castilla-La Mancha. It was inaugurated in February 2013, and has a space of 750 square meters built.

It is a museum in the form of a labyrinth, where each visitor knows what is the Carnival in Spain and the world, especially Miguelturra, from how it is celebrated or how it has evolved.

For his part, Jorge Jiménez, PhD in Art History, wanted to express his gratitude to all those who make possible the realization of this exhibition, from the work providers themselves to the Carnival Association of Miguelturra, workers from different areas of the City Council, as well as the entire government team of the Consistory. In this sense I want to make a special mention to the councilors of Celebrations and Culture, Diego Rodríguez and Fátima Mondéjar, for their outstanding involvement in this project.

It is a pleasure for me to bring this exhibition to Miguelturra for many reasons that can be reduced in three.

In the first place, to take place in the temporary exhibition hall of the Interpretation Center of the Carnival, in MOMO, a space that we designed in the company where I worked a few years ago. For MOMO I came to live in Miguelturra, he brought me somehow and today I return to his rooms, something that makes the project especially exciting for me.

Secondly, because it is my desire to see that temporary exhibition hall full of life. MOMO was a very ambitious project that included many elements and transversal ways of development, among which this room was included to keep alive a space that in itself is already tremendously competitive. MOMO is a product and a cultural service with almost unimaginable possibilities and seeing it alive is a way to boost our social, cultural and even economic location.

And third, by the very theme of the exhibition, which mixes the carnival with the world of theater. In “The carnival on stage”, we approach how in the Italian Renaissance a new theatrical genre emerges, while the first companies are professionalized, it is the “Comedia del arte”. This is not born from nothing, but arises from a rich folk tradition that floods the public square, in it we find everything from mountebanks to farces, from jesters to blind storytellers, and of course, the thousand and one manifestations of the carnival.

The carnival was introduced in this theatrical genre that lasted more than three centuries, traveling throughout Europe and the rest of the known world with its characteristic characters on the stage. These were stereotypes, they acted with masks and always played the same role. They were divided into three: the servants, the old and the lovers. Among them the most famous are Pantaleón, Harlequin, Pierrot … names that sound to us all because they are in our culture deeply rooted. When the genre was exhausted and died, the common people did not let these characters disappear and kept them alive in that carnival they had been born, so we are talking about a round-trip relationship.

The exhibition consists of sixty pieces including prints, costumes, books, toys and a mural of contemporary art made expressly for it. It also includes three scenographies and two audiovisuals. With it the viewer will be able to see the complete series of illustrations of the Frenchman Maurice Sand of which was already used for the realization of some of the rooms of MOMO.

For all this, just invite them to join us at the opening next Friday, January 26, at 20:30 h. to know more about her and share a wine in an entertaining time.

The three have finished the presentation to the shout. ¡¡LIVE OUR CARNIVAL!! 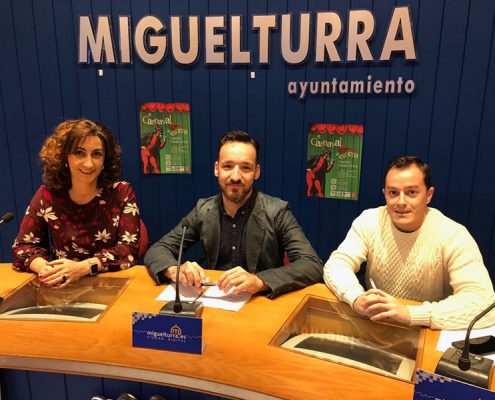 Presentation of the exhibition “The Carnival to Scene” 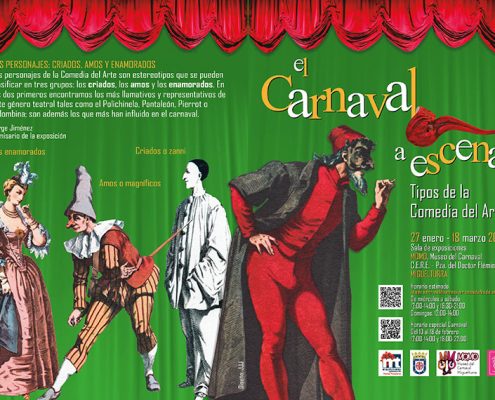 Diptych of the Exhibition

Victoria Sobrino, presents the Carnival of Miguelturra in FITUR
Scroll to top