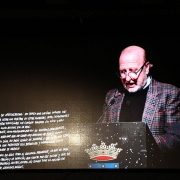 The streets of Miguelturra are again filled with street masks, costumes and rocks to celebrate the declaration of national tourist interest

From one o’clock in the afternoon, the peñas began to concentrate on the Plaza de España to celebrate that our carnival is of national tourist interest, for the first time, the Carnival was celebrated outside its usual date. Throughout the afternoon, the color, the joy and the party flooded the downtown areas of the town.

In the Plaza de España and around eight o’clock in the afternoon, once again there were peñas, authorities, street masks and people in disguise who wanted to participate in one of the most important events of the day, the Gala on the occasion of the declaration of the Carnival of Miguelturra as a Festival of National Tourist Interest. At eight and a half, the delegation headed towards the Palace of Carnival, the usual place for celebration of most carnival events in the town.

With a Carnival Palace practically full, the delegation arrived and the ceremony began, in the presence of the Mayor of the town, Victoria Sobrino, members of the Municipal Corporation, Counselor of Economy, Employment and Business of the Board of Communities of Castilla-La Mancha, Patricia Franco, President of the Provincial Council of Ciudad Real, José Manuel Caballero, vice president of the Association for the Development of Campo de Calatrava, María Jesús Villaverde, as more representative political personalities who wanted to be present to support the declaration and celebrate that our Carnival is a Festival of National Tourist Interest.

Of course, the King of Carnival, Serafin Delgado, President of the Carnival Association of Miguelturra, Raúl Domínguez, members of the carnival clubs of the town, masks older than all years, relatives of the previous kings of the carnival, José Gornés and Amalio Segura, presidents and different components that over the years have directed the Association of Peñas.

The crier of honor of the Carnival of Miguelturra, Guillermo Summers, felt unable to attend the event, but he sent us a few words of thanks, affection and devotion to the town and its people.

The ceremony began with a speech by the Mayor, Victoria Sobrino, the counselor of the community board, Patricia Franco, the President of the Provincial Council, José Manuel Caballero and the President of the Miguelturra Carnival Association, Raúl Domínguez, agreeing that the Carnival of Miguelturra, deserved this declaration for being one of the carnivals with more history and tradition of our country.

We must remember that the Carnival of Miguelturra, has been celebrated uninterruptedly over time, that its history is lost over the years, there are documents of the nineteenth century that prove their existence and none of the various prohibitions that have tried to prevent their celebration, they achieved that in Miguelturra was not held, despite the persecutions suffered by the street masks by the ‘Serenos’ and the Civil Guard.

Throughout the Gala, different audiovisuals were shown that showed the traditions and history of the Churriego carnival, especially our great hallmark, The Street Mask.

There was no shortage of music in the act, the Comparsa la Victoria de Puertollano, winner of the Murgas and Chirigotas contest of the Miguelturra Carnival in the last two years, put the audience on their feet, especially when they mentioned the carnival of Miguelturra.

The Gala, also served to show the recognition of the town to all people and institutions that have made this statement possible, Board of Communities of Castilla-La Mancha, Provincial Council, Association for the Development of Campo de Calatrava, Román Rivero Nieto, received the award on behalf of all the Corporations that Miguelturra City Council has had.

They also received recognition from different media, all the presidents that the Peñas Association has had, supporters clubs, civil protection, kings of the Carnival and, of course, the Street Mask.

Once the Gala ended, the party continued at Doctor Fleming Park until late at night, the Sonital Orchestra was in charge of giving good rhythm and closing a great night of Carnival.