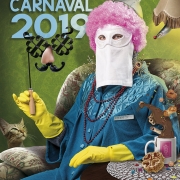 It is the winning work of the 2019 Carnival Announcement Contest and will be the image of the first Carnival of Miguelturra with declaration of National Tourist Interest.

For the third time, Cristóbal Aguiló Domínguez will put the image at the Carnival of Miguelturra, in 2011 he got it with ‘The Carnival gives us life’ and in 2017 with ‘The dream of a carnival pastry che’.

The jury, met on the afternoon of January 9 at the House of Culture and ruled that of the 21 works presented, What don’t you know me? outside the winning work of this contest, endowed with a single prize of 1,000 euros.

He was born on February 3, 1968 in Bromley Kent (UK). Illustrator, graphic and creative designer, he has been linked to the world of communication since 1987, the year in which he graduated as a senior illustration technician at the E.A.A.O.A in Valencia.

He began to work as a freelancer for his own clients, later he would join the creative teams of several advertising agencies, first in Valencia and a few years ago in Murcia.

Nowadays, from his own study of graphic communication he carries out all kinds of design projects (www.cristobalaguilo.es).

Aguiló, has participated in various competitions throughout the national geography, obtaining more than one hundred awards from 2011 to the present.