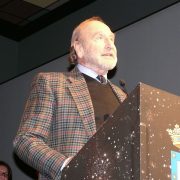 More than 900 people have packed the Carnival Palace of Miguelturra to celebrate the first of the carnival events of 2017 and has done so by proclaiming as honor town crier the one who already preached the most emblematic party of the town in 1997, the scriptwriter and television presenter Guillermo Summers.

The mayor of Miguelturra, Victoria Sobrino, has been responsible for delivering the parchment that accredits Summers as illustrious Crier of Honor Miguelturra Carnival in gratitude for his involvement and the work he has developed over the years in the election of carnival crier miguelturreño.

Sobrino, who has been visibly excited by the celebration of this act, wanted to publicly thank the love with which Guillermo Summers has always treated Miguelturra and his carnivals, noting that “it is quite an honor to be a representative figure of our”.

The first mayor, has also appreciated the work that has played the Carnival Association of Miguelturra to organize this beautiful homage of proclamation of the Crier of Honor, without forgetting the work carried out from the areas of Culture and Celebrations as well as the entire carnival community.

Finally, Sobrino thanked the presence of “the best comparsa of Cádiz and Spain”, Los Cobardes, recognizing the privilege that Miguelturra has been chosen as the final destination of the winners of the 2016 COAC. He has also made public the gratitude to the “Los Cansaliebres” peña “for making us warm up for our beloved carnival”.

For his part, the already proclaimed town crier of honor, Guillermo Summers, has reiterated his gratitude “to all those who have made it possible for him to be in Miguelturra again today”. Among his words of thanks, Summers stressed his desire “to maintain my status as a crier” by showing his satisfaction with quartets that recalled how 20 years ago he gave the proclamation of the carnival “and how I am happy today in this beautiful city where I have been shown again our great friendship”. The brand-new town crier of honor has thanked the people of Migueltur to dedicate this honor, affirming that “there is no equal carnival, from Miguelturra to heaven”, to finish with “Three Cheers … live Miguelturra”.

Prior to the event, Guillermo Summers, accompanied by the mayor, Victoria Sobrino, the Councilor for Culture, Fátima Mondejar, the councilman of Celebrations, Diego Rodríguez, as well as members of the Municipal Corporation and carnival authorities, such as the King of Carnival, Serafin Delgado, the president of the Carnival Association of Miguelturra, Raúl Domínguez, the 2016 Major Masks and those that will be proclaimed in 2017, has discovered a commemorative plaque of this act in the MOMO (Carnival Museum).

The act of proclamation of the Town Clerk of Honor took place at the end of the end of tour concert of the Cádiz troupe “Los Cobardes” by Antonio Martínez Ares, which with his anthology “Al Caldero” has shown to the respectable public of Miguelturra (which has stopped appraising the comparsa) why they rose last year 2016 with the first prize of the Official Contest of Grouping of the Carnival of Cádiz.

Martinez Ares’s troupe has started the applause of the crowded Palace of Carnival and has put on foot the audience on repeated occasions through its musical repertoire of pasodobles, cuplés and potpourri. An event that has been organized by the “Los Cansaliebres” club in collaboration with the City Council of Miguelturra.

We must remember that with this concert, “Los Cobardes” put an end to a tour that has taken them to cover a large part of the Spanish geography; something that has been a great pride for the carnival community of Miguelturra.