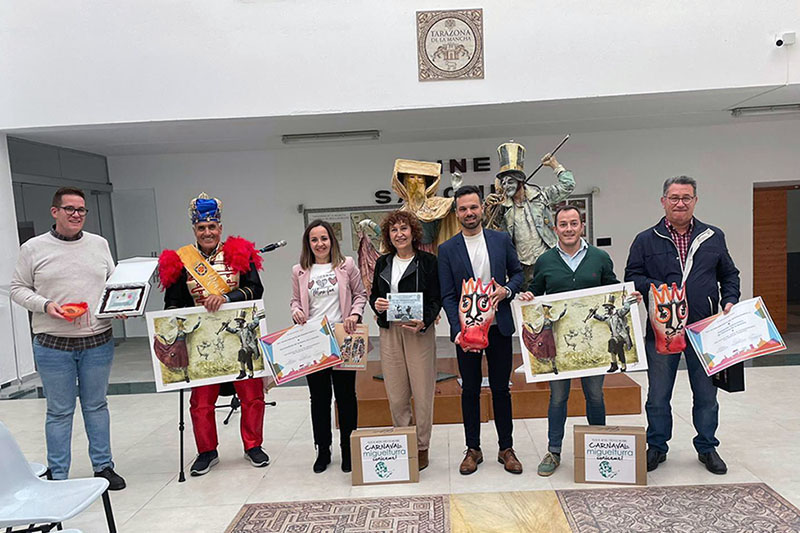 Two carnivals with very similar identities and of tourist interest

On Sunday, November 13, a bus with more than 50 people has traveled from Miguelturra to Tarazona de la Mancha to participate in the twinning of both carnivals.

Clubs from both towns, the Mayor of Miguelturra and the Mayor of Tarazona de la Mancha, Laura Arriaga and Miguel Zamora, presidents of the Associations of Clubs from both towns, Raúl Domínguez and Segundo Jiménez, the Councilor for Celebrations of the Miguelturra Town Hall, Diego Rodríguez, components of both municipal corporations, the King of the Churriego Carnival, Serafín Delgado and the major masks of the next Carnival of Miguelturra 2023, José Luis Rivas, Encarni Sánchez, Leandro Arévalo and Charo Sánchez, have participated in this first meeting of brotherhood between carnivals of our region.

They are two very similar carnivals with a long tradition, which have very similar characteristics, being celebrated even in times of prohibitions and restrictions, as the presidents of the Peñas Associations of both towns have explained, being an idea that had been brewing for a long time. and several months since the Association of Clubs of the Carnival of Tarazona de la Mancha.

Laura Arriaga and Miguel Zamora expressed their satisfaction with the execution of this beautiful initiative. After several months of work between both Consistory, this idea has been carried out, leaving the doors open for other carnivals in our region to join this twinning,  uniting popular festivals that generate cultural, human and economic enrichment of both locations.

During this intense festive day, all the people participating in the event have been able to visit the carnival monument, bullring and the interpretation center of local heritage and carnival,  where various gifts and a commemorative plaque of the meeting have been exchanged.

In a few months, it will be the residents of Tarazona who travel to Miguelturra to see and enjoy the Churriego carnival.