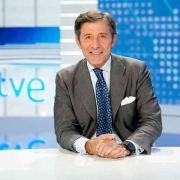 Jesús Álvarez Cervantes, was born in Madrid in 1958 and has a degree in Journalism from the Complutense University of Madrid.

He began his career at the La Voz de Madrid radio station, later moving to RNE. In 1977 he debuted on television in the TVE news space for seven days and in 1979 he will make the jump to the newscasts presenting the sports section. In 1981 and until 1986 he will present Stadium Study, being one of the commentators of the Barcelona Olympics 92.

He has obtained numerous distinctions, among which the Ondas Prize in 1977 and 2011 (collective to the TVE News) and the 2000 Golden Antenna awarded by the Federation of Radio and Television Associations of Spain.