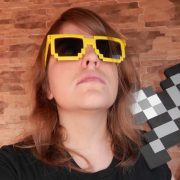 Ciudarraleña, 29, is a graphic designer and began her studies at the “Pedro Almodóvar” School of Arts in Ciudad Real, starting with Bachelor of Arts and then continue her training for three years in the higher studies of Graphic Design. These studies have enabled him to bring to light numerous projects; creation of logos, signage and advertising of social networks for events; some of national character, such as Manchacómic, dedicated to comics, and ManchaArte, which combines culture, art and science.

Of the aforementioned events, it is worth mentioning that not only does he have the authorship of his logos, but he has also been part of the organization during all the years that have been held.

He has also developed the image for companies such as Serendipia or Z84 Editions, and associations such as “A.C.M.A.” (Castellanomanchega Association of Anthropology), “I Help You” (Association for children with interdisciplinary support and early care needs) of Manzanares, among others.

After seven years, his experience has been enriched by the appearance of new projects, such as the layout of a story written by the children who participated in the reading clubs of libraries and schools in Ciudad Real, “We create a story” published by the Serendipia editorial, or its participation for several years in the renowned journal Lalata.