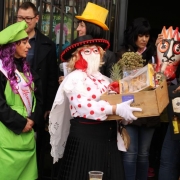 The Frying Pan Fruit contest and the street mask, the most important carnival events on Monday

The Peña Rocheros, have been the organizers of the event and Octavio Martín has elaborated lemonade, which is always exquisite. The SER channel broadcast live during the celebration of the event.

Awards of the XXXVI Contest in Frying Pan Fruit:

The first prizes were sponsored by the City Council of Miguelturra consisting of 60 euros each, the second prizes sponsored by ‘El Colmao de Miguelturra’ and each one of them with a batch of products valued at 40 euros. All the winners received a box of liquors sponsored by La Gaditana and the traditional Carnival Pottery.

The late night began with the concentration of Masks Street in the vicinity of the Plaza de España, from 19:00 h. They filled Carnival Street with joy and color, joking the naive strollers to the cry of “What don’t you know me?

The television program ‘Wide is Castilla-La Mancha’ did not want to miss the event and broadcast live from Carnaval Street.

Even Zeus and Neptune cried for Mrs Sardina
Scroll to top