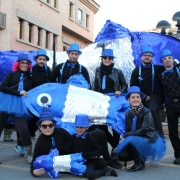 The menacing rain throughout the afternoon, did not make an appearance during the tour of the funeral procession.

The sadness of the Gods for the loss of Mrs Sardina, soaked with tears in the streets of Miguelturra during the celebration of the duel. But Zeus and Neptune, calmed their sadness so that the funeral procession in honor of Mrs Sardina, could receive the honors of those who went out to dismiss her as she deserves.

At five o’clock in the afternoon, the funeral procession began the traditional funerary parade through the streets of Miguelturra, crowded with people who wanted to dismiss the unfortunate Sardina between sobs, tears, kicks, smiles and dances.

As is traditional, the purifying fire caressed Mrs Sardina and raised her with the Gods, to put an end to the most traditional burial of the carnivals of Castilla-La Mancha declared of National Tourist Interest.

And as the proverb says ‘the pains with bread are less’, the delegation went to the tent of the Peña la Cabra to taste some grilled sardines and a good lemonade, which undoubtedly softened part of the grief of those present.

‘Requiescat in pace’, but… until next year.