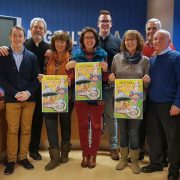 The Department of Celebrations and the Association of Clubs of Carnival of Miguelturra have already announced the name of those who will be Major Masks of the Carnival 2017, one of the most emblematic and representative figures of this festival declared of Regional Tourist Interest and Costumbrista and that in this year they will be represented by José Cañizares and Antonia Nieto.

The mayor of Miguelturra, Victoria Sobrino, accompanied by the councilman of Celebrations, Diego Rodriguez, the King of Carnival, Serafin Delgado and the president of the Association of Peñas del Carnaval, Raul Dominguez, has been in charge of welcoming the Masks May 2017 at a reception that took place in the Plenary Hall of the Town Hall of Miguelturra. In this presentation have also been present the Masks of 2016, known as “outgoing”, José Muñoz Ramírez and Mercedes Rivas Tellería.

Sobrino has welcomed José and Antonia highlighting that for the carnival of Miguelturra the Masks are the emblem, “since throughout the carnival you will be in charge of representing, as Carnival authorities, all the people of Miguelturra and we will recognize it during these days“.

Sobrino has explained that they are a life-long carnival couple since “Pepe” has been together with Octavio Martín, founder of the Peña carnavalera Los Segadores in 1981, “so they carry from within, like many churriegos and churriegas, the carnival”.

The mayor “wanted to congratulate and also thank the outgoing Major Masks for the good work done last year and he hopes that this year the entrants will enjoy the affection of the people of Miguelturra because it is a unique opportunity to experience the carnival”.

Of course, he has also thanked Serafin, Raul Dominguez and the councilman of Celebrations for the involvement and previous work so that these carnivals, one of the most important festivals of the municipality, go forward in the best possible way.

After the mayor the first to speak has been the King of Carnival has been delighted that friends like “Pepe” and “Antonia” this year are the Major Masks and explained that it has “cost very little to convince them and they have always said yes “, and like every year, Serafin repeats that “this is one of the best experiences that can be lived in the Carnival of Miguelturra“.

For his part, the president of the Association of Peñas del Carnaval, Raul Dominguez, has begun by welcoming from the Peñas Association to Pepe and Antonia, as Major Masks  2017, to which he has said they will have all the necessary support to live this magnificent experience as it is to be Mask Major. He also thanked José and Mercedes for their role as Major Mask 2016. “For me, as the first year of president of the Carnival Peñas, it will be a pleasant memory to share these carnivals with you“.

The 2016 Major Masks, José and Mercedes, have had a few words of welcome for those who are going to be their carnival companions, reiterating that for them it was an honor and a privilege “and you will enjoy it this year”.

Both have wanted to thank everyone “for the support both institutional, as the supporters, for the affection that showed them all the people and of course, to those who were Major Masks 2015 Diosco and Vero for support throughout.

The protagonists of this year, have been delighted and hope to enjoy and be up to defend the Miguelturra carnival as it deserves”.

Finally, we must remember that José Cañizares and Antonia Nieto will be proclaimed as Major Masks at the Carnival Palace on Saturday, February 25, once the outgoing Major Masks give them the witness, although they will be their inseparable companions in all the official acts during the carnival 2017.