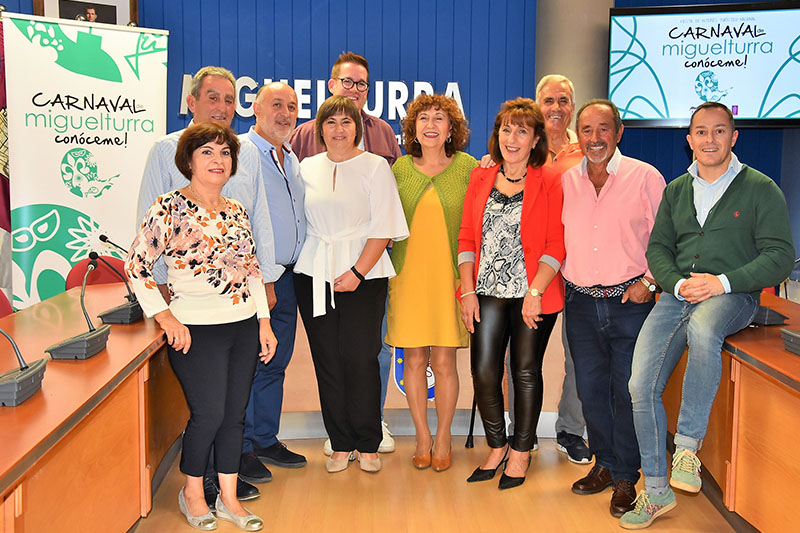 The next carnivals will have two new pairs of Major Masks, something that has not happened since 1987

Last Tuesday, October 18, the presentation of the two new pairs of Senior Masks for the next Carnival 2023 took place in the plenary hall of the Miguelturra City Council, with the presence of the Mayor of the town Laura Arriaga, Councilor for Celebrations, Diego Rodríguez, King of Carnival, Serafín Delgado, president of the Peñas Association, Raúl Domínguez and the Major Masks 2022, Gloria Cruz and Antonio Gómez.

José Luis and Leandro have been a carnival couple since the eighties and are better known as ‘Flat and Lightning’.

Jose Luis is 57 years old, he is a commercial agent by profession and is married to Encarni, who is 50 years old and is a domestic worker, they have a son, José Luis, as well as two daughters, Inés María and Encani.

Leandro is 65 years old, he is a businessman and he is married to Charo, they have two daughters, Rosario and Loli.

Two inseparable couples who form a great team, they are in charge of preparing cars and sets, while Charo and Encarni are in charge of making the costumes, in such a way that we have seen them dressed as Policemen, Firefighters, parodying advertisements and programs. of television, of Monarchs, Princes and Princesses, of chefs with some other star and an endless number of characterizations, each more amusing.

On February 18 at the Palacio del Carnaval, they will receive the affection of all of Miguelturra for their good work and great humor, being proclaimed as the 49th and 50th couples of Major Masks of the Miguelturra Carnival, a festival declared of National Tourist Interest.