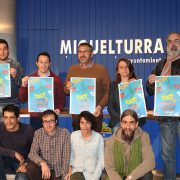 Organized by the Celebration Area in collaboration with the Economic Promotion Area, the Cultural Association “Peñas de Carnaval”, the Small Business Association and the Miguelturra Employment Shuttle.

Miguelturra is already preparing for the carnivals and this time it is done by the hand of the small shop in the town with the “First Carnival Showcase Contest“.

Diego Rodríguez, as councilman of Celebrations, has announced the bases of the same in a press conference in which he has been accompanied by the councilor of Economic Promotion, Miguel Fernandez; Francisco Ramos, president of the Association of Small Commerce and Alberto Soria, vice president of the Peñas de Carnaval Cultural Association, since they have collaborated with Celebrations in the organization of the same.

A contest whose corporate image has been prepared by the participants in the Miguelturra Employment Shuttle and whose objective, as explained by the mayor of Celebrations, “is to encourage and reward the merchants who, with their effort, support the promotion and improvement of the image of the trade with a special decoration of its shop windows, thus creating a pleasant carnival atmosphere of purchase during these dates and giving an added incentive to local commerce”.

For his part, Miguel Fernandez explains that “working together implies that the event goes ahead with the empowerment not only of this contest, but of the agents involved, starting with the small business and ending with the festivities of the town.” Something that Ramos has corroborated that he has remembered “that investing in small businesses is investing in the people”.

Finally, Soria said “that everything that is to promote the biggest party in the town, as is the carnival, will be supported by the Association of Peñas”.

The rules indicate that all retail and wholesale establishments in Miguelturra and all establishments that have a display case, such as an office, training center…, may participate in the contest.

The inscription in the contest will be gratuitous, having to realize in the House of Culture of Miguelturra. The registration period will be from 1 to February 10, 2017 and the trade must have prepared its showcase on February 15, 2017 until March 5, 201.

The jury appointed by the organization will visit the participating stores during the period established in the previous base on Thursday, March 2 and will announce its verdict at the awards ceremony to be held on March 4 at the Drag gala.

The names of the winning shops will be published on the website of the City Council www.miguelturra.es and will be called by telephone on Friday March 3 to attend the awards ceremony. The decision of the jury will be unappealable.

Three prizes will be awarded, with one remaining deserted if the jury deems it appropriate: Award for originality and innovation; Award for the best composition and design and Special Prize of the public.

All of them will be endowed with 30 publicity spots on Radio Miguelturra and an announcement of 8 by 11 in the BIM (Municipal Information Bulletin) of April 2017, mask of the carnival and a diploma. Also the commercial stores Sacra Distribuciones e Inmobiliaria and Viajes Rodrigo will give away a weekend gift voucher for each winner valued at 150 euros respectively.

For the special prize of the public, will be available, from February 15 to 2:00 pm on March 2, an urn located in the House of Culture, in which the population that buys or consumes in stores or participating establishments, deposit their voucher filled and stamped by the establishment. All the people who deposit their vouchers in the box will participate in the raffle of three purchase vouchers valued at 50 euros each, which will be granted by Sacra Distribuciones, Viajes Rodrigo and Rodrigo’s Inmobiliaria respectively, to be exchanged at any participating establishment in the competition.

The owners of the participating establishments in the contest will not be eligible for the draw. The communication of the winners will be made by telephone and will be made public by the municipal media. The prizes are not accumulative.

José Cañizares and Antonia Nieto will be the Major Masks of the Carnival ...
Scroll to top