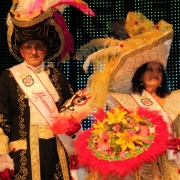 New Major Masks for the Carnival of Miguelturra, the first with declaration of National Tourist Interest

As of today, Antonio and Mª Paz, are also from the Peña de Mascaras Mayores, a large family of illustrious carnival.

At 18:30 h., Began the concentration of the delegation in the Plaza de España, to accompany and tour the streets of the town with Mª Paz and Antonio. A large group of street masks, members of the local Peñas, Orestes and Mª Carmen, major masks 2018 and other years, Serafin Delgado, King of Carnival, Raúl Domínguez, President of the Miguelturra Carnival Association, Diego Rodríguez, Councilman of Celebrations and the Mayor of Miguelturra, Victoria Sobrino, in the CERE would be added different members of the Municipal Corporation.

The retinue, paraded towards the gathering point of Antonio and Mª Paz, the Peña los Cansaliebres were in charge of the organization. At the meeting point, family and friends accompanied Mª Paz and Antonio, how excited they received the affection of the participants.

The next stopping point was the headquarters of the Peña los Cansaliebres, which prepared a great appetizer, which served as a snack for a long afternoon-night of emotions.

Around 9:00 p.m., the delegation arrived at the CERE and the Palacio del Carnaval stood to receive Mª Paz del Hierro Cabrera and Antonio Rodrigo Donate, in its proclamation as Major Masks of Miguelturra Carnival.

After the intervention of the mayor of the town, Victoria Sobrino, the new major masks took the stage for the imposition of bands that accredit them as Major Masks of Miguelturra Carnival and the corresponding diplomas, as well as the traditional bouquet of flowers, box of wine and the ceramic mask commemorative of the Carnival.

Mª Paz and Antonio, wore an impressive costume designed by themselves and based on the Carnival of Venice, that of Mª Paz made of sardón broken white with gold, with a front fold and adornment in rhinestones, skirt of layer and body fitted, the skirt has a tulle decorated with madroños and the body decorated with golden thread. Antonio’s suit, coat and trousers in black, decorated with trimmings and gold cord.

This year and as a novelty, Magdalena Yébenes, Valentín Muñoz and Octavío Martín, major masks 1984, 1985 and 1986 respectively, renewed their bands and in subsequent years will do the rest of the major masks.

Casimiro Donate and Eufrasia Delgado, older masks of 2004, were in charge of giving them the traditional mask and apron of the Peña de Mascaras Mayores that they will use on Monday in the friying pan fruit contest.

Finally, children, friends and neighbors of the Association of the Barrio de Oriente took the stage to congratulate the new couple of major masks, receiving from their children a nice gift, nothing more and nothing less than a cruise.