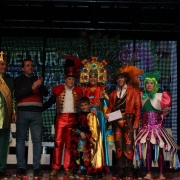 The Palace of the Carnival is refilled to witness the XXXIV Carnival Costumes Contest. At 21:30 h., The local Peñas presented their costumes with those who will participate in the Pinata Sunday parade. The winning costumes in the modality of men and women, will remain during the next five years in the Carnival Museum ‘MOMO’.

The awards were the following:

Once this contest was over and while the jury was deliberating, the prizes of the III Carnival Showcase Contest were handed out, this event has caused the shops in the town to show the festive and carnival atmosphere that Miguelturra breathes on these dates.

Special Audience Award, gift voucher for a trip sponsored by the City Council of Miguelturra, for Disfrutería de Alba.

All the winners received the corresponding diploma, mask of the carnival, 30 spots of publicity in Radio Miguelturra and an announcement of 8 by 11 in the BIM of the month of April.