The Cansaliebres return to the rolling and fill the palace of the carnival, Tic Tac and the anthology of Tino Tovar anteroom to Carnival 2019.

About 10:00 pm on Saturday 22 February, a carnival palace practically full, received the components of the Comparsa Cadiz Tic Tac.

They made be requested, things of the direct one, but those of Tino Tovar, connected with a public that gave itself to the good work on the stage of this great Cádiz comparsa. A great comparsa and a public delivered, good mix to start the pre-carnival of Miguelturra.

The anthology of Tino Tovar, did not leave indifferent to the assistants, we do not forget that great third position in the Falla Theater of 2018.

The song of Cadiz, The seasons, the creator and the spirit of Cadiz among other interpretations, made the audience vibrate.

During the event, the president of the Peña los Cansaliebres, Alberto Soria, gave the comparsa the typical ceramic mask of Miguelturra Carnival and the presenter of the event, Tere Rodado, a beautiful bouquet of flowers.

The members of La Peña los Cansaliebres, thanked the sponsoring companies and collaborators, because without them, this event could not be held.

The Stand of Castilla-La Mancha stage of the presentation

About 14:30 pm on Friday 25th January, has been presented the Carnival of Miguelturra at the International Tourism Fair 2019.

The mayor of the town Victoria Sobrino, has expressed her satisfaction to present to our carnival as a festival of national tourist Interest, highlighting the street mask as the most representative figure of the party.

Nephew, has also made a tour of the various events to be held during the upcoming carnivals of 2019, including the opening speech, burial of the sardine, Carnival Costumes Museum, Chirigotas and Parade of Murgas, groups and floats.

It has also made reference to the Carnival Museum ‘MOMO’, one of the few museums in the world exclusively dedicated to Carnival.

The first mayor of the consistory of Miguelturra, has finished his speech with the most known phrase in our carnivals, what don’t you know me?

The event was attended by a large group of people representing the local Peñas, the councillor for celebrations, Diego Rodríguez, various members of the Municipal Corporation, King of Carnival, Serafin Delgado, president of the Carnival Association of Miguelturra, Raúl Domínguez, Major Masks 2019, Antonio and Mª Paz, Major Masks 2018, Orestes and Mª del Carmen, as well as our street mask . 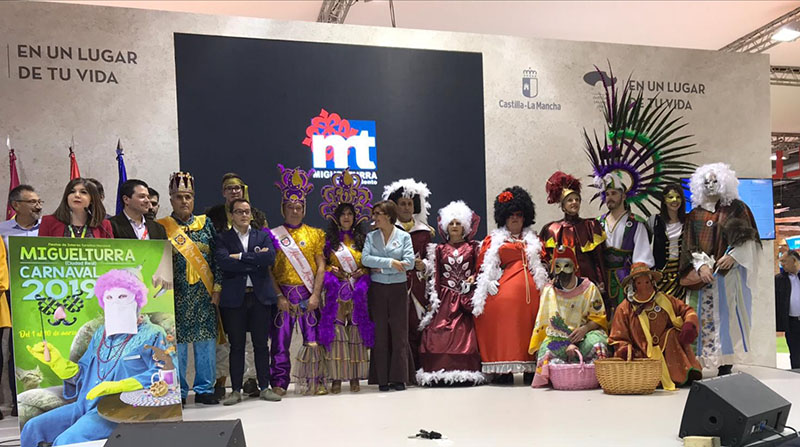 It is the winning work of the 2019 Carnival Announcement Contest and will be the image of the first Carnival of Miguelturra with declaration of National Tourist Interest.

For the third time, Cristóbal Aguiló Domínguez will put the image at the Carnival of Miguelturra, in 2011 he got it with ‘The Carnival gives us life’ and in 2017 with ‘The dream of a carnival pastry che’.

The jury, met on the afternoon of January 9 at the House of Culture and ruled that of the 21 works presented, What don’t you know me? outside the winning work of this contest, endowed with a single prize of 1,000 euros.

He was born on February 3, 1968 in Bromley Kent (UK). Illustrator, graphic and creative designer, he has been linked to the world of communication since 1987, the year in which he graduated as a senior illustration technician at the E.A.A.O.A in Valencia.

He began to work as a freelancer for his own clients, later he would join the creative teams of several advertising agencies, first in Valencia and a few years ago in Murcia.

Nowadays, from his own study of graphic communication he carries out all kinds of design projects (www.cristobalaguilo.es).

Aguiló, has participated in various competitions throughout the national geography, obtaining more than one hundred awards from 2011 to the present.

And there have been 4 editions since we started with that crazy idea of Pre-Carnival.

This time from Cádiz comes the comparsa of Tino Tovar finalist in the COAC 20018 ‘Tic-Tac, Tic-Tac’ and the anthology of Tino Tovar.

It will be Saturday, February 2 at 9:00 p.m. In the CERE room in Miguelturra, half an hour before the start of the show, the doors of the Palace of the Carnival will open.

Tickets can be purchased from tomorrow January 5 and the price of 10 euros in advance at the Panadería Bollería Fegopan, the Restaurant Los Arcos and the House of Culture in Miguelturra, in The Patio of my House in Ciudad Real and in Morales Dry Fruits in Daimiel, can also be purchased through WhatsApp in the number +34 610665737 or through any member of the Peña Los Cansaliebres. At the box office the price will be 13 euros. 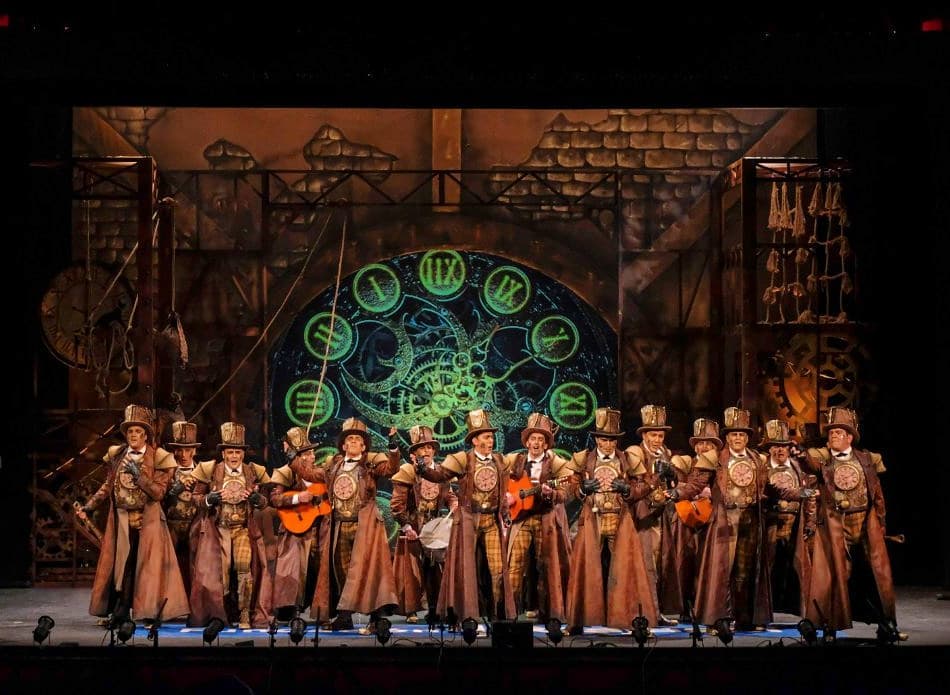 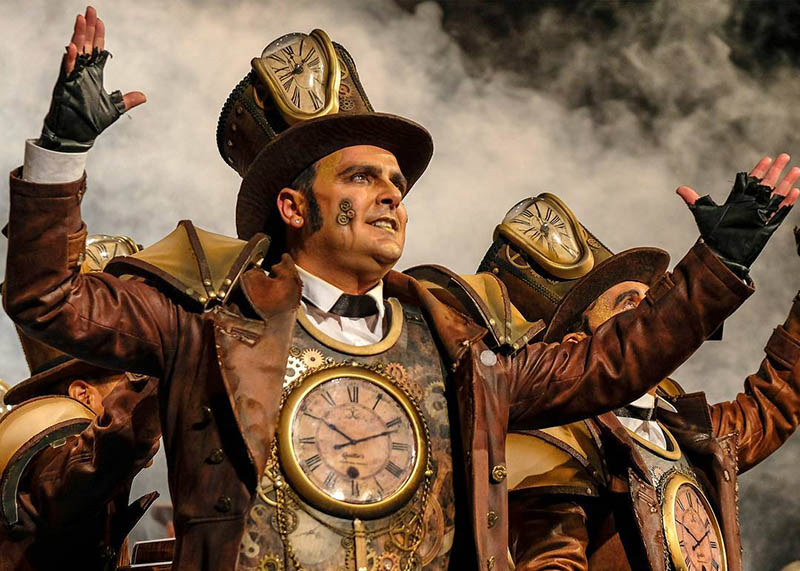 Tino Tovar, one of the most successful authors of the Cadiz carnival.

Constantino Tovar Verdejo, better known in the world of the Carnival of Cádiz as Tino Tovar, starts in the world of the comparsa in the children and youth categories, after several years of success in these categories, he debuted in 1996 in the adult category with the group ‘Los Callejeros’, with which manages to reach the semifinals.

In the following years he sneaks into the final obtaining different prizes, but it will be in the year 2000 when he gets to win the first prize with the comparsa ‘Los del año catapum’, he will repeat in 2005 with ‘El Espíritu de Cádiz’, in 2011 with ‘Juana la Loca’ and in 2014 with ‘La Canción de Cádiz’.

In his last participation in 2018, he gets third place with ‘Tic-Tac, Tic-Tac’.

Not only he gets great prizes in the modality of comparsas, in 2005 he makes double with the comparsa ‘El Espíritu de Cádiz’ and he composes the music to the chirigota ‘Los que salen por gusto’ which is awarded with the first prize in the modality of chirigotas, repeating in 2007 with the chirigota ‘Los Juan Palómez, yo te guiso y tu te lo comes’ and in 2011 a new double with ‘Juana la Loca’ in comparsas and in chirigotas with ‘Ricas y Maduras’. 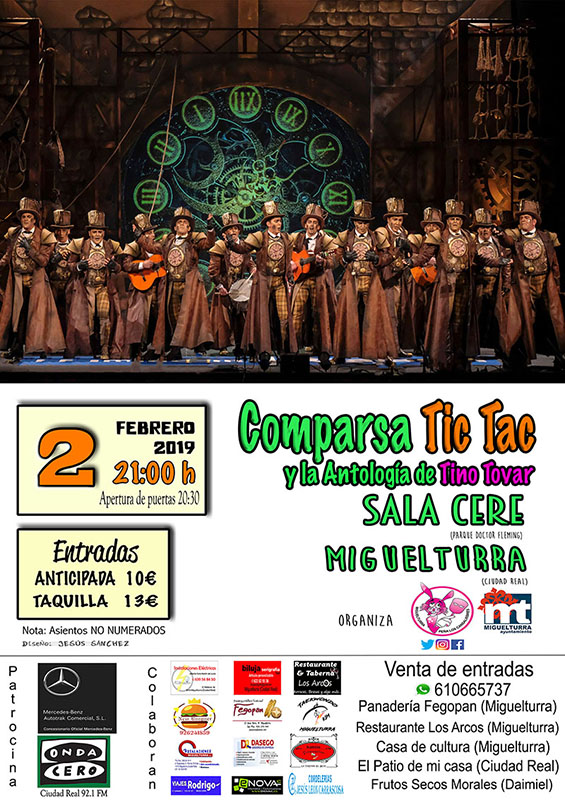 The frying pan fruit contest and leaving a mark, along with the street mask, most important events of the carnival Monday

At 12:30 h. the XXXV CONTEST IN FRYING PAN FRUIT started inside the CERE facilities due to the rain and it was done with the presence of the President of the Provincial Council, José Manuel Caballero, Mayor of Miguelturra, Victoria Sobrino, Vicepresident of the Provincial Council, David Triguero, Councilman of Celebrations, Diego Rodríguez, councilors of the City Council of Miguelturra, Carmen Mohíno, Pedro Mellado and Miguel Angel García, major masks 2017, José Cañizares and Antonia Nieto and the masks major 2018, Orestes Corrral and Mª del Carmen León.

The Peña los Rocheros, have been the organizers of the event and Octavio Martín has made the limoná, which is always exquisite.

Awards of the XXXV Constest in Frying Pan Fruit:

The first prizes have been sponsored by the School of Natural Chef Cooking consisting of two cooking courses valued at 70 euros each, the second prizes sponsored by El Colmao and Hecón Construction Tools, have received a batch of typical products valued at 40 euros, they have also received a box of liquors sponsored by La Gaditana and the traditional Carnival Pottery.

In the afternoon and from 16:30 h. the contest Leaving a Trace was started, a competition for the exhibition of animals in disguise and organized by the Peña Kapikua. The winners in the contest were the following:

The late night began with the concentration of Masks Street in the vicinity of the Spain Square, from 19:00 h. They filled the streets of Carnival with joy and color, joking the naive strollers to the cry of “Why don’t you know me?”